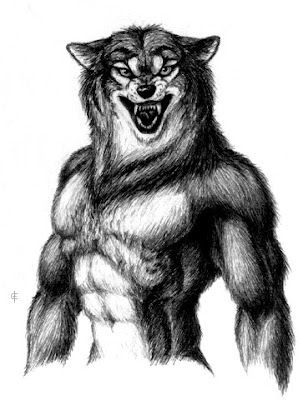 A male, mid-twenty year old curmudgeon, and shape-shifter. In his natural state he is a gelatinous liquid. Twenty-four years ago, with no memory of his past, he was found alone in a mysterious space craft that appeared in the Denorios asteroid belt. He was found by the Bajorans and lived amongst them. At first he was sort of an Elephant Man, a source of curiosity and humor as he turned himself into a chair or pencil. Finally he realized he would have to take the form of a humanoid to assimilate and function in their environment. He does it, but resents it. As a result, he performs a uniquely important role in the ensemble: he is a character who explores and comments on human values. Because he is forced to pass as one of us, his point of view usually comes with a cynical and critical edge. But he can't quite get it right, this humanoid shape, though he continues to try. So he looks a little unfinished in a way. He's been working on it a long time. Someone might ask him: Why don't you take the form of a younger man? His answer: I would if I could. He has the adopted child syndrome, searching for his own personal identity. Although he doesn't know anything about his species, he is certain that justice is an integral part of their being, because the necessity for it runs through every fibre of his body -- a racial memory. That is why he became a lawman. He has a couple of Bajoran deputies; he doesn't allow weapons on the Promenade, and once every day he must return to his gelatinous form.
Posted by Jamie Sutcliffe at 15:49