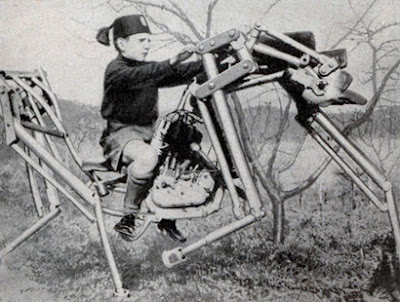 Summon once dormant mech-steed / The steed lies dormant / your call, arousing aural sensors / gaseous excretions blast the surrounding atmosphere into a state of agitation / mech-steed rises / steam components / computerised components / a gamut of technological traceries / multiple authored open-source components / his eyes are lighting rigs capable of illuminating the vast mass burial shafts of the future / his ears are satellite plains produced by the Japanese / his limbs are mongo-contort consortium ribbed / his lungs inhale petro-chemical fumes / his lungs exhale the noxious gas of a million human deaths / his soft mane, fibre optic / will lacerate the souls of a thousand unborn children / his hoofs bare diamond cut carbon cuticles / his life force drains your life force when he breathes / he dies and dies and lives / he lives in space / he lives in the frosted ice dwellings/ he lives in air / he lives in eternal barns / the barns are maintained by a million scientists / the scientists are in the employ of equines and equines techno-pharmaceutical™ / his lodgings, if you will, are gigantic iron sidings / an enormous dry dock for the vast horse / he is a battle pony / an equine companion to none but his million master scientists, and to none of them a true friend / he is his own machine but he dreams of grass and sprints through the meadow like a real horse / his memory chip contains one million uploaded horse dreams / He runs across the planet on his four massive hoofs / his hooves are each the size of a city / he is ancient / he is new / he will try and eat grass, but it is not grass that maintains his life / it is petrol and the internet which supply him with horse data in order to seem more real / given his size he is fooling no one / the scientists believe that real horse dreams render him more servile and to an extent this is true / old models showed signs of a disastrous autonomy, often resulting in gross lethargy and inactivity / old models slept well but would not run / old models slept well but would not act like horses.

Posted by Jamie Sutcliffe at 16:01